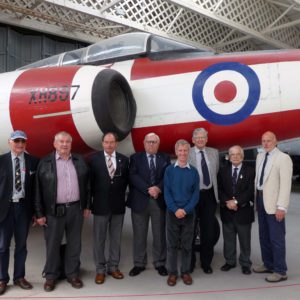 By Anne Dolamore on 9th October 2017 in News

What an extravaganza the Duxford Battle of Britain Air Show weekend was! With thousands of people flocking to Cambridgeshire to watch the dramatic air displays, get the family involved in all kinds of activities, and get their books signed by authors and veterans, we hope everyone who attended had a brilliant time! Steve Bond, author of newly published “Javelin Boys”, was in attendance, signing exclusive copies which you can order here. The book was also signed by several veterans, who appear in the photo above: Mel Evans, Bryan Elliott, Brian Bullock, Jack Broughton, Malcolm Elliott, Ed Durham and Peter Day. It was a great opportunity for collectors to obtain some more signatures, and for aviation fans to add to their bookshelves!

Six Hawker Hurricanes were in flight, and if you want to find out more about the magnificent aircraft that proved itself during the Battle of Britain (in which a total of 1715 Hurricanes saw service), you can check out “Hawker Hurricane Survivors” here – which includes a special bookplate signed by both author Gordon Riley, and Wing Commander Tim Elkington, who wrote the foreword.

We also had a fantastic launch of Guy Ellis’s WK275 and were thrilled to welcome owner of the very aircraft, Tim Wood, to the event. Both Guy and Tim signed a couple of copies for us, but we have a very limited number left, so order yours quickly!

Finally, we’d like to congratulate IWM Duxford for putting on such am impressive event and say thank you to everyone that came over to the Aviation Bookshop tent to see us!