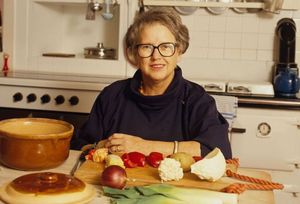 Jane Grigson was born in Yorkshire in 1928.  She was educated at boarding school and Newnham College, Cambridge, where she read English Literature.  Graduating in 1949, she went to Florence for three months to learn Italian.  On her return to England she worked as a picture researcher with a London publisher, where she met her husband Geoffrey Grigson.  Later as a translator of Italian books she won the 1966 John Florio prize for her translation of Beccaria’s Of Crimes and Punishments.

After the birth of their daughter Sophie, the Grigsons bought a tiny cave house in central France and it was seeing the wonderful products on sale in even the smallest market towns of the region that inspired Jane’s interest in food.

Her first book Charcuterie and French Pork Cookery (1967) was the fruit of four years’ research.  From 1968 she was the cookery writer for the Observer colour magazine and her subsequent books, Good Things (1971) and Food with the Famous (1979), were based on her highly successful articles for the magazine.  She received both the Glenfiddich Writer of the Year Award and the Andre Simon Award for her Vegetable Book (1978) and her Fruit Book (1982).  In 1977 she was voted Cookery Writer of the Year for English Food.

Jane Grigson died in March 1990.  In one of her obituaries she was aptly described her as ‘the most companionable presence in the kitchen’.