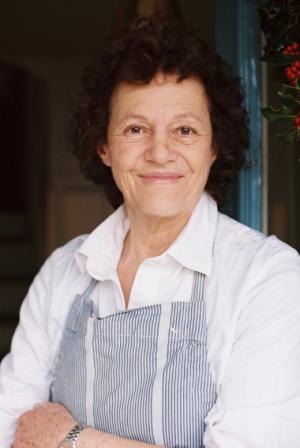 Elisabeth Luard is an award-winning food writer who often illustrates her own work.   Cookbooks include European Peasant Cookery, European Seasonal Dishes and Tapas (all in print with Grub Street).  Other work includes The Food of Spain and Portugal, The Latin American Kitchen, Truffles, a couple of doorstopper novels drawing on her misspent youth, and three memoirs with recipes, Family Life, Still Life and My Life as a Wife (in print with Bloomsbury).   She has lived and worked in Latin America, Spain, Italy and France and brought up her own young family in a remote valley in Andalucia.  She now lives in an old farmhouse in the foothills of the Cambrians in mid-Wales but continues to travel widely. She contributes regularly to newspapers and magazines (including The Oldie, Daily Mail, Daily Telegraph, TLS and Country Life) and contributes to on-line publications in the UK and US, including California-based ZesterDaily.com She is Trustee Director of The Oxford Symposium on Food and Cookery and her most recent cookbook is A Cook’s Year in a Welsh Farmhouse. She is currently at work on a food and travel memoir, Squirrel Pie and Other Stories, for publication in spring 2016. Her website is elisabethluard.com and she is active under her own name on Twitter and Facebook – seven grandchildren keep her up to speed on social media.  Nevethless she carries watercolours and sketchbook to record travels and what’s been cooked for dinner rather than using a camera.