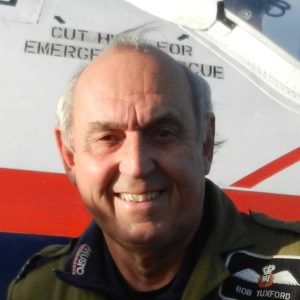 Squadron Leader Robert Tuxford, AFC RAF Retd, graduated from the RAF College Cranwell in 1970. His first operational tour was on 214 Squadron on the Victor K1 3-point tanker in the air-to-air refuelling role. Selected for a coveted American exchange posting, Bob then flew the Boeing KC-135A Stratotanker within Strategic Air Command at Mather AFB, California as an aircraft commander and instructor. On promotion to squadron leader, he returned to the UK to Central Flying School to undertake training as a qualified flying instructor. After a brief instructional tour in Yorkshire flying the familiar Jet Provost, he was posted back to the Tanker Force at RAF Marham as an executive on 57 and then as flight commander on 55 Squadron. Flying the Victor K2 in support of the South Atlantic operations during the Falklands war, he participated in the iconic first Black Buck mission. After qualifying as a test pilot at the prestigious Empire Test Pilots’ School in 1983 at the A&AEE Boscombe Down, Bob undertook flight trials on a wide range of aircraft including all the RAF’s tankers: the Victor, VC10 and newly-acquired TriStar. On leaving the RAF in 1987, he flew as a commercial pilot for Monarch Airlines, retiring in 2010 with close on 19,000 hours and seventy types in his logbook.