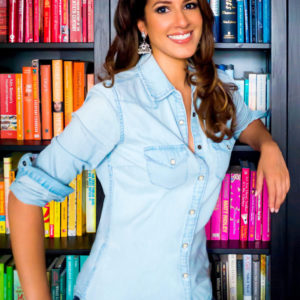 Vicky Bhogal began her adventure on the food scene as recipe conduit and curator at 24 years old with the award-winning bestseller Cooking Like Mummyji in 2003.

An avid campaigner of causes, next was Vicky’s brainchild celebrity recipe book for the Make Poverty History campaign, A Fair Feast in 2005, which she compiled and edited. Insisting that 100% of the proceeds go to charity, the book raised over £100,000 for The Fairtrade Foundation and Oxfam’s Make Trade Fair Campaign.

2006 saw the release of A Year of Cooking Like Mummyji, picking up and continuing to explore the much-loved thread of her first book, against the backdrop of the seasons and elegant poetry.

Vicky also created her own authentic, wholesome and natural chilled foods range, ‘Just Like Mummyji’s’ exclusively for Tesco 2004-2007, becoming a bar-raising £3.2m brand within 6 months and selling over a million meals in its first year, winning her a Grocer Award in 2006 and short-listing for Entrepreneur of the Year Award at the Asian Jewel Awards 2006, sponsored by Lloyds TSB.

Her fourth book, Flavour: A World of Beautiful Food, was published by Hodder and Stoughton in 2009. Unveiling the global breadth of her kitchen, she takes an array of delicious ingredients and shows how to combine them according to their flavour profiles to create exciting new dishes. It was shortlisted as Best Hardback Book in the world under 35 Euros in the 2010 Le Cordon Bleu World Food Media Awards.

Vicky happily lives, cooks, blogs, writes and eats in London and the English countryside. She has also worked in advertising, journalism, fashion, tech, finance, and wrote the world’s first academic study of British Asian youth culture and linguistics, earning the highest undergraduate mark in the field in the history of King’s College, London.  She recently filmed cookery TV for Grokker and is currently completing her first novella and developing her own design range.